Speed to Edinburgh by express train then see the sights by hop-on, hop-off tour. Next day head into the picturesque Highlands to see wild Rannoch Moor, Glen Coe and take the chance for a monster-spotting cruise! Based in Inverness enjoy a full-day excursion to the scenic Isle of Skye and beautiful Eilean Donan castle. Next day enjoy the trip of a lifetime on the West Highland Railway Line aboard the Jacobite Steam Train, the real Hogwarts Express. Return directly to London by high-speed train.

Edinburgh - get the best views of Edinburgh and discover its colourful history on a hop-on, hop-off tour

Eilean Donan Castle - discover this fairytale castle for yourself

Isle of Skye - see the weird landscapes of Trotternish, visit delightful port-town of Portree and marvel at the towering Cuillin mountain range

The whistle blows and your train glides out of Kings Cross Station in the heart of London bound for Edinburgh. As you speed northwards to the Scottish Capital you’ll travel through the Viking City of York; Durham, famed for its magnificent Cathedral and bustling Newcastle, which straddles the River Tyne.

During the journey, enjoy free WiFi and access to the on-board buffet where tasty food and drink can be purchased. Typically, it will take just under 4 hours and 30 minutes to reach Edinburgh.

On arrival in Edinburgh it’s a short walk to your city centre hotel and after you’ve checked-in Edinburgh is waiting to be discovered. Join a hop-on, hop-off tour to see many of Edinburgh’s most famous sights, including the historic Grassmarket where there are gruesome tales to be told. Travel along the wide streets of the Georgian New Town to see grand squares before heading into the medieval Old Town; both these areas are UNESCO World Heritage Sites. Take time out to visit mighty Edinburgh Castle then tour along the famous Royal Mile to see the Palace of Holyroodhouse, HM The Queen’s official residence in Scotland and the Scottish Parliament building.

Travel from Edinburgh northwards towards Stirling, with its grand castle standing guard over the city. Soon you’ll cross into the Highlands and make an ascent of the Black Mount, with its spectacular views over Loch Tulla below.

Next drive over the brooding expanse of Rannoch Moor before stopping in the heart of Glen Coe for a souvenir photograph. You'll be spellbound by this magnificent scenery and the sinister tale of the infamous 1692 massacre.

It’s a short drive to Fort William which sits by the banks of Loch Linnhe. There’s a stop at the Commando Memorial where, hopefully, you’ll get a great view of Ben Nevis, Britain’s tallest mountain.

Next, tour through the Great Glen making a stop at Loch Ness where you can take the opportunity to visit ruined Urquhart Castle and mount your very own monster hunt as you cruise the deep and mysterious waters of the loch. Alternatively, spend time in the pleasant village of Drumnadrochit, the location of the famous Loch Ness Centre and Exhibition.

You’ll be met on arrival at Inverness and transferred to your hotel in the centre of the Capital of the Highlands. The remainder of tonight is free for you to dine as you wish.

Today head for the picturesque Isle of Skye. Leaving Inverness behind you’ll drive through beautiful Glen Carron, stopping to view the panorama of Loch Carron and the mountains of Applecross.

A real highlight is picturesque Eilean Donan Castle. Here there is the chance to take photographs and explore the castle that featured in many films including Highlander, and The World Is Not Enough.

After crossing “over the sea to Skye” the magnificent mountain scenery of the Cuillin Hills is our first treat. These soaring peaks dominate the island, first the gentle Red Cuillins then the jagged and daunting Black Cuillins. There is a photo-stop where the alp-like views are at their most impressive.

The delightful town of Portree is the islands largest settlement. During the break here, why not take a stroll down to the harbour to capture the scene of the pastel-painted houses that overlook the bay.

Later head for the Trotternish Peninsula famed for its lunar-like landscape. You’ll see the Old Man of Storr, an impressive pinnacle that rises 49m and The Quiraing, where strange rock formations called "Needle", "Table" and "Prison" are seen. There’s also a stop to view Kilt Rock, whose basalt columns are said to resemble the pleats of a kilt.

Back on the mainland enjoy a scenic drive through Glen Shiel, enjoying stunning views of the Five Sisters mountain range. Our return to Inverness will take us along the banks of Loch Ness. We’ll arrive in Inverness city centre around 19:30 hrs.

It’s an exciting day ahead as you look forward to a memorable journey aboard the Jacobite Steam Train, the real Hogwarts Express.

From Inverness tour through the Great Glen and make our way towards Fort William. Head towards Mallaig along the famous “Road to the Isles”, one of Scotland’s most famous routes. Enjoy beautiful views over Loch Eil before stopping to view the impressive Glenfinnan Viaduct, made famous in the Harry Potter movies. You’ll cross the 21 arches of this magnificent viaduct later – by train. Glenfinnan is also renowned for its connections to Bonnie Prince Charlie who landed here in August 1745 to raise his standard at the start of the ill-fated Jacobite Uprising. The haunting monument you can see was built to commemorate the Highlanders who lost their lives fighting for the cause.

Look out for the stunning beaches at Arisaig and hear the sad tale of the Highland Clearances that took place here before reaching the end of the road at Mallaig. This popular fishing port is just the perfect location for a freshly-landed seafood lunch.

At the station, join the train and take your seats. Departure time comes, and as the train puffs its way out of the station, an unforgettable journey along the famous West Highland Railway begins. The steam-hauled train will pass Scotland’s shortest river, deepest loch and highest mountain along the 42-mile journey. Have your camera at the ready for a souvenir photo as the train crosses the Glenfinnan Viaduct, just like the Hogwarts Express!

On arrival in Fort William reboard your coach for a scenic drive back to Inverness.

This morning enjoy an early breakfast before heading to Inverness Railway Station where the Highland Chieftain express train is waiting. From Inverness catch a glimpse or two of the Moray Firth before the tracks turn southwards and you head for the stunning beauty of the Cairngorms National Park. The range of peaks that we will see includes Ben Macdui, Britain's second-highest mountain.

After passing through Dalwhinnie with its famous distillery reach Drumochter summit, the highest point on the British rail network. There are wonderful vistas to enjoy as the train descends through the Grampian Mountains. Keep a careful watch as deer can often be seen on this stretch of the line.

At Blair Atholl look out for whitewashed Blair Castle, the seat of the Duke of Atholl. The next stop is Pitlochry, a picturesque Victorian tourist town. From Perth travel through Gleneagles, which serves the famous hotel and golf resort before reaching Stirling with its magnificent castle starting guard over the city.

From Edinburgh, the train will follow the same route as your northbound journey and is scheduled to arrive at London’s Kings Cross Station by late afternoon (subject to change).

What can I expect on this Freestyle Train Tour?

This carefully planned semi-independent tour will stretch your holiday time to the max, without making you feeling rushed. A unique combination of travel by train, comfortable accommodation and quality sightseeing will give you extra time to explore Scotland in greater detail. All the documentation you need, including your rail tickets, will be emailed to you. Just print these out and you are good to go. Any questions or if you need your documents early - just email or call us, weâ€™re here to help. On the tour youâ€™ll travel independently by train to and from London. Weâ€™ll make sure you have a reserved seat and weâ€™ll send you a comprehensive itinerary, so you know whatâ€™s happening at any time during your tour, as well as helpful city guides for you to download to your smart-device. Accommodation in Edinburgh and Inverness is provided in comfortable 3-star hotels that are just a short walk from the railway station and are convenient for sightseeing and the tour departure points. A buffet breakfast is included in the cost of the tour. The sightseeing tours that are included as part of this package are led by experienced driver/guides who will provide an entertaining and informative commentary in English.

What type of room should I choose?

Will someone meet me in Scotland?

This is a semi-independent tour so you will not be met on arrival in Edinburgh or Glasgow. A comprehensive and customised itinerary is included as part of your documentation together with Official Guides to Edinburgh, Glasgow and Inverness (depending on the itinerary that you are travelling on). Assistance is also available by telephone 7-days a week.

What is the journey on the Jacobite Steam Train like?

Described as one of the great railway journeys of the world this 42 mile one-way trip takes you past a list of impressive extremes. Starting near the highest mountain in Britain, Ben Nevis, it visits Britainâ€™s most westerly mainland railway station, Arisaig; passes close by the deepest freshwater loch in Britain, Loch Morar and the shortest river in Britain, River Morar, finally arriving next to the deepest seawater loch in Europe, Loch Nevis! The train will cross the 21-arched Glenfinnan viaduct (a location made famous in the Harry Potter films) which overlooks Loch Shiel and the Jacobite monument. The train may pause on the viaduct, time permitting, to allow you to take in the magnificent view. On some tours the route may be reversed.

Can I reserve specific seats on the coach?

Seating on this tour is on a first come, first served basis and cannot be pre-booked. If you are travelling as part of a group please make sure that all members of the party arrive at the departure point together.

We’re sorry but children aged under 3 years cannot travel on this tour.

IMPORTANT: Once booked this tour cannot be changed or cancelled

Accommodation
The price of this tour includes hotel accommodation with en-suite bathroom.

Train Times
The times shown above are for guidance only. The train times for your journey will be shown on your tickets and itinerary.

Admission Prices
In order to give you maximum flexibility admission fees are not included in the cost of this tour. 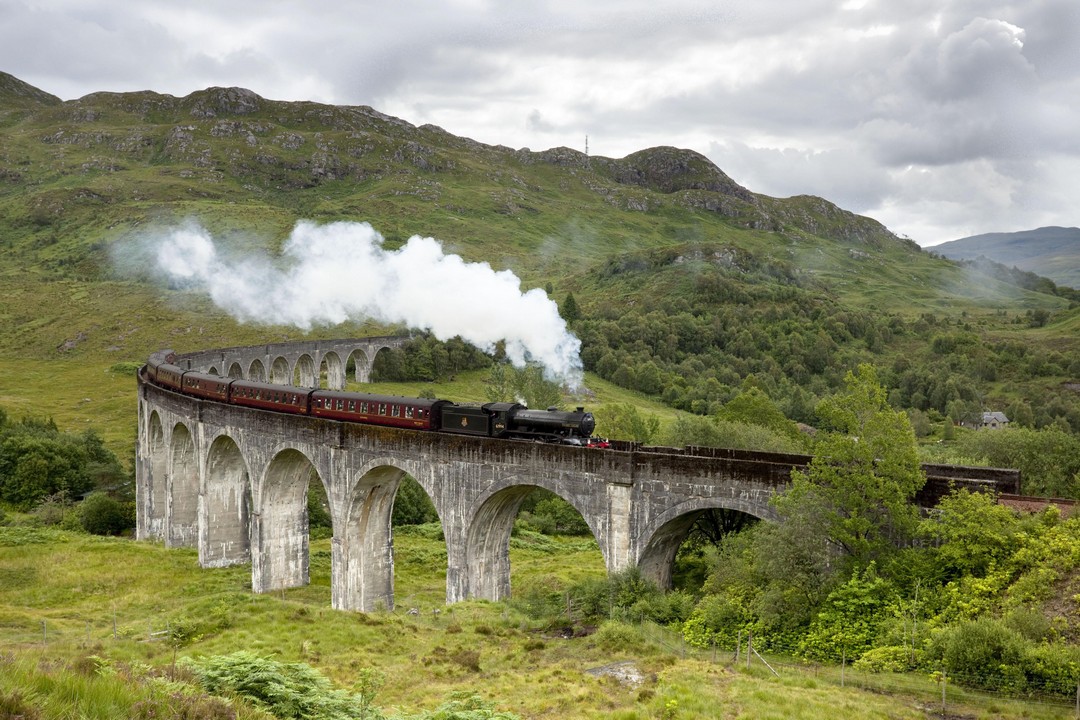 Isle of Skye and the Jacobite Steam Train 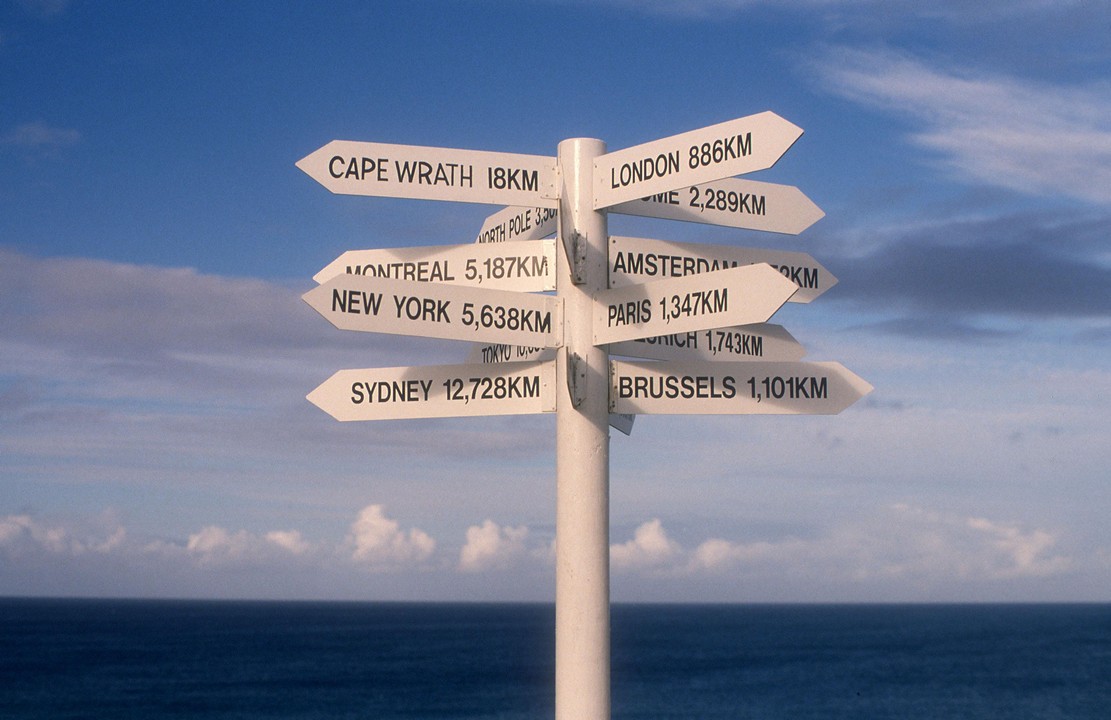 Edinburgh, Skye and the Far North 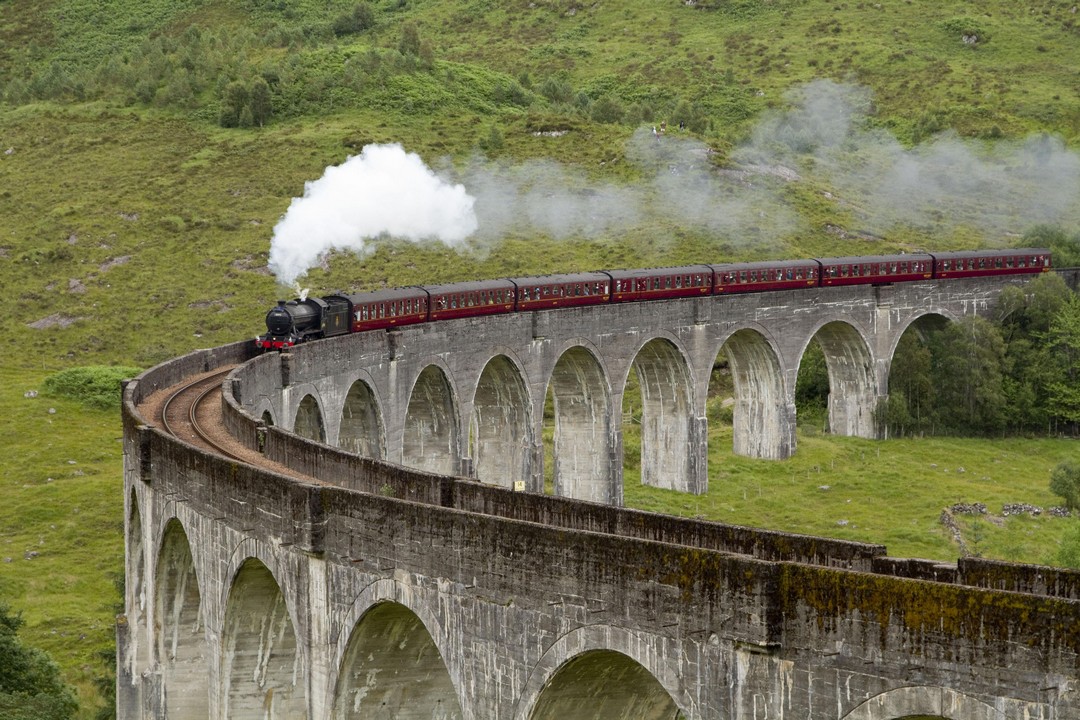 Road to the Isles